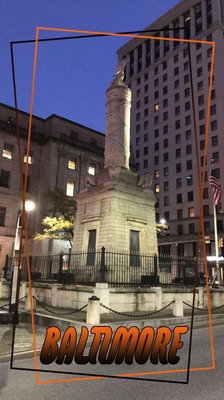 There are no reviews of
Battle Monument.
Be the first to ⭐ Write a Review.

1846 Battle Monument The monument, designed by Baltimore architect J. Maximilian M. Godefroy (sculptor to the Court of Spain) and built in 1815-25, is 39 feet (11.9 m) tall. The base of the monument is an Egyptian Revival cenotaph. It is an unusually democratic monument for the time in that it records the names of all who died, regardless of rank. More

Construction on the Battle Monument began on September 12, 1815, a year to the day after Baltimore soundly defeated the British in the War of 1812, and the monument endures as a commemoration of the attack by land at North Point and by sea at Fort McHenry. More

4 reviews of Battle Monument "Aside from the Washington Monument up the road in Mt Vernon; this is one of the best pieces of historical art in Baltimore. As of July 4th 2015, Battle Monument will be 200 years old! The fact that this structure has been able to be preserved throughout multiple centuries is amazing. My favorite time to visit is after dark when the lights are shining perfectly on ... More

Aside from the Washington Monument up the road in Mt Vernon; this is one of the best pieces of historical art in Baltimore. As of July 4th 2015, Battle Monument will be 200 years old! More

(Adjacent interpretive panel affixed to wrought iron fence) Built 1815-1825 to commemorate those who fell in the British attack on Baltimore in September 1814, the Battle Monument stands on the site of Baltimore’s first courthouse. When Calvert Street was leveled in 1784, the courthouse was raised on an arched brick More

This monument is also the official emblem of the City of Baltimore, having been adopted for the city seal in 1827. It commemorates those who died in defending the city from the British attack, September 12 to 14, 1814, the same attack which was the occasion for the writing of the National Anthem. More